The Zika virus has captured headlines for its horrific effects on fetuses. Everyone is well aware that the virus spreads through mosquito bites.  However, less well known is that Zika can also spread through sexual contact and blood transfusions. Since transfused blood is a frequently utilized component of modern medicine, keeping the blood supply free from Zika is critical to prevent its spread.  It is with this goal that the FDA has recently updated its recommendations stating “all donated units of blood should be screened for Zika Virus” (August 26, 2016). This prudent recommendation is just the latest attempt to keep the blood supply safe from nasty infections. Any donated blood is already being screened for diseases such as HIV, hepatitis B, hepatitis C, and West Nile virus among others. Since the basis of transfusion-transmitted disease is infected donors, it begs the question: Can we create synthetic blood and eliminate donor reliance?

Every two seconds a blood transfusion is performed in the US.  This astonishing demand is met by over 40 thousand volunteer donors rolling up their sleeves and baring their veins every day.  Once drawn from a donor, blood begins a complicated and expensive journey before it can be transfused into a needing patient. Assuring a safe blood product is not cheap, the cost of producing a single, safe red blood cell unit is roughly $250, which equates to nearly $3 billion/year in production costs alone.

The complexity and expense of obtaining a safe, constant supply of this life-saving product are due to three major attributes of blood itself. 1) Blood is not universally compatible among all people, and therefor transfusions require time- consuming tests to assure compatibility. Transfusion of the wrong blood type is often fatal. 2) Blood requires meticulous and extensive safety screening as unsafe blood can transmit many infectious diseases, including HIV 3) Blood degrades when out of the human body; limiting its shelf life.  These characteristics limit our use of blood in the field (ambulances/battlefield), make blood transfusions inaccessible in developing countries, and result in occasional transfusion- transmitted diseases. These limitations could be overcome if a synthetic blood substitute were available. Fortunately, scientists and entrepreneurs are attempting to create such a product.

To better understand the future of blood transfusions we need to delve into their past. Prior to the mid-17th century healers attempted to replace lost blood with animal blood, urine, milk, pitch, beer, and wine; and as expected patient survival was measured in minutes.  In 1667 the first recorded successful human/human transfusion was made.  However, at the time blood types were not understood and predictably the vast majority of transfusions resulted in a quick death.  In 1907 the Czech physician Jan Jansky first described the four blood groups, leading to type-specific blood transfusion and the common use of this life saving procedure.  During World War II the nation and military ran into massive shortages of available blood.  This prompted the US armed forces to begin funding the development of synthetic blood substitutes.  The early substitutes were abandoned after they proved damaging to healthy patients. The public became interested in blood substitutes again in the 1980s when the HIV epidemic hit and blood transfusions were shown to transmit the disease. Some 14,000 people acquired HIV through contaminated blood in the early 80s before testing became available. Faced with the possible end of donated blood, interest in blood substitutes spiked again.

The research in creating synthetic blood resulted in two major synthetic products. The first is known as hemoglobin-based oxygen carriers (HBOCs). Red blood cells, the oxygen-carrying cells present in blood, are able to transport oxygen because they are full of the protein hemoglobin, which helps bind oxygen and allows 70x more effective oxygen transport than water. All the HBOCs use hemoglobin, freed from red blood cells, to carry oxygen.  Intuitively, this makes perfect sense: if the human body is using hemoglobin packed in red cells, and hemoglobin can be made synthetically then a solution of hemoglobin should be able to replace blood.

Were it that simple, we would already have synthetic blood. There are several problems with free hemoglobin in the blood. The first is instability. Free hemoglobin breaks into small protein sub-units that are filtered from the blood by the kidneys.  Quick clearance from the body means only a short duration of oxygen delivery (compared to 120 days for donated blood).  Secondly, hemoglobin interacts with another molecule, nitric oxide (NO), a molecule responsible to dilate small blood vessels. Normally, hemoglobin in red blood cells releases bound NO at the proper time to dilate blood vessels and improve blood flow.  However, free hemoglobin diffuses into the blood vessel walls and strongly binds NO. This causes small blood vessels to severely constrict resulting in a massive spike in blood pressure (think about constricting end of a hose causing water to spray more forcefully). When this constriction happens in the kidneys it can irreversibly damage them.  Furthermore, constriction of the small blood vessels in the heart leads to heart attacks.  For these reasons, free hemoglobin is not a viable blood substitute.

What if you could modify hemoglobin to keep its oxygen-carrying capacity but eliminate its aforementioned short comings?  This is the research that surged in the 80s and has continued until today. The HBOCs accomplish this through different chemical modifications of free hemoglobin.  These modifications include cross-linking the subunits of hemoglobin together (to stop them from splitting up), polymerizing multiple hemoglobin molecules together (increasing circulation time), and there are even chemical modifications to prevent hemoglobin from binding NO (reducing the blood pressure spike). These basic modifications were performed by several companies which showed their product was able to carry and deliver oxygen equivalently to blood in animal studies and in the late 90′s and the early 2000s they began a series of clinical trials.

The first set of trials administered HBOCs to seemingly healthy patients intraoperatively to avoid transfusion with blood. The justification being that these healthy people need only a small increase in oxygen carrying capacity so why expose them to any possible infectious risk if all you need to do is bridge them for a few days.  By all accounts, these trials were successful: Giving an HBOC to a patient undergoing an elective surgery reduced the need for blood transfusions without significant side effects.

When these limited clinical trials were successful, the manufacturing companies went after the multi-billion-dollar prize… using a blood substitute where real blood was impossible to deliver.  That is, delivery of blood to individuals in traumatic situations who could not receive cross-match compatible blood (i.e., in the ambulance, or in the battlefield).  These trials opened up a whole can of worms.  For ethical reasons, patients are required to give consent before beginning treatment with any unestablished method. However, when a patient is incapacitated from a severe trauma they cannot provide consent. Does that mean trauma clinical trials are impossible?  Nope.  The FDA created an “Exception from Informed Consent” for this very reason and the HBOC trials were the first treatments to undergo such “consent free” trials.

These trials were extremely controversial before they started. Instead of consenting an individual, companies/researchers held public hearings in a region and put up billboards instructing individuals how to opt out by obtaining a wrist band.  The trials took place in mostly poor and lower educated areas where residents were unlikely to fully understand the risks. The controversy only grew after the trials because the second set of trials were failures. Several HBOC products showed that they were significantly more lethal than standard treatment (just giving saline) in traumatic blood loss cases. The trial failures along with the hundreds of millions of lost development costs meant R&D funding in the space all but evaporated. In 2008, all previous HBOC trials were reviewed and it came to light that HBOCs showed increased mortality in traumatic settings across the board. A recommendation was made to the FDA to prohibit further phase III clinical trials of HBOCs until the science advanced.

The science has been advancing over the past decade. The most recent generation of HBOCs now perform a chemical modification on hemoglobin known as PEGylation.  This is the process of adding a polyethylene glycol (think non-reactive plastic) directly to a molecule to make it less reactive in the body.  This has resulted in several new trials looking at PEGylated HBOCs to help reduce the need for transfusions and for use in patients where transfusions are not an option.  These trials are more limited in scope than the large trials of the early 2000s.  However, if Zika does infiltrate the blood supply in a meaningful way public interest and funding will flow into this space again.

Of note in South Africa, Hemopure, a HBOC, cleared clinical trials and is available to prevent blood transfusions in elective surgery cases.  One of the major reasons for passing clinical trials there is the frighteningly high rate of HIV in the South African adult population (18.8%!), which means obtaining safe blood is extremely difficult. Furthermore, your dog may get HBOC after trauma as Oxyglobin is approved for veterinary medicine in the United States.

The other major synthetic blood product, known as perfluorocarbons (PFC), is not based on hemoglobin but instead completely synthetic.  PFCs are simple in concept…they are a non-reactive liquid that has the ability to dissolve oxygen at concentration similar to air! This science fiction-like substance can dissolve oxygen so well that it is possible to be submerged in PFC and be able to breath normally. This concept, known as liquid breathing, is demonstrated here on a sedated mouse submerged in PFC. 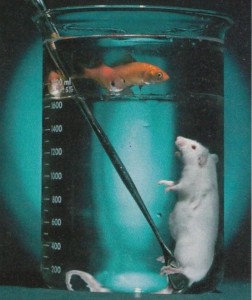 Treatment with PFCs does not include submerging a human in PFC liquid but rather injecting PFC mixture into their blood that allows them to take up additional oxygen by breathing 100% oxygen. In addition to being completely synthetic, PFCs are also very small, 1/40th the size of a red blood cell.  This allows them to theoretically deliver oxygen at a site where blood cannot flow such as brain tissue beyond the site of a stroke. Sadly, the news is not all good with PFCs.  During a phase III trial, the product Oxygent was shown to increase stroke and was subsequently not approved for sale by the FDA.  Another product, Oxycyte, was not cleared to even undergo phase III trials after results from a phase II dose escalation trial in Switzerland.  If, however you find yourself in Russia or Mexico with a traumatic bleed you could potentially receive a PFC as one is approved in those countries.

In conclusion, making a synthetic blood product is tremendously difficult.  The blood we carry in our veins is the result of millions of years of evolution and not quickly supplanted by a laboratory creation.  However, there is promise in the two current strategies to reduce our reliance on donated blood.  With a massive benefit to society and gigantic financial prize at stake, research should continue until synthetic blood is a reality. Although less studied, I believe a PFC solution is more likely to serve as a future blood substitute given the ease of manufacturing and biological inertness. But until we solve our limitations I strongly urge you to help out your community, roll up your sleeves, and donate blood today! http://www.americasblood.org/donate-blood.aspx